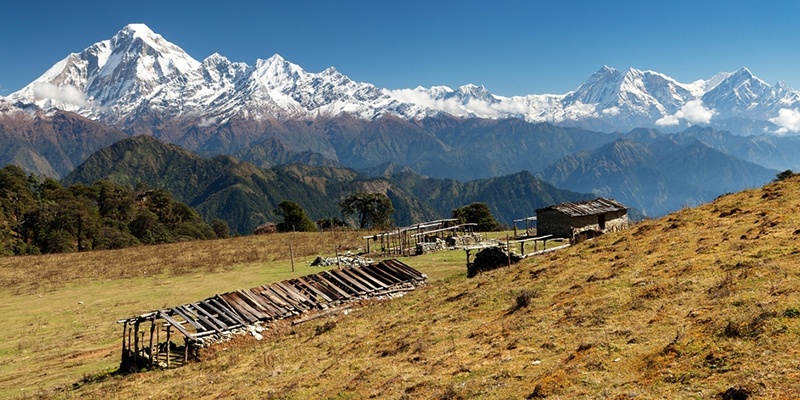 Newly Opened Trekking Routes of Nepal take you close to the wilderness and nature where life is simple and people are friendly. This trekking trails will take you beyond your imaginations of normal trekking as you enter into river valleys, lush green forest and uninhabited rain shadow areas behind the Himalayas.

Below is the list of 6 Newly Opened Trekking Routes of Nepal:

1. Jaljala – The Hidden Treasure of Rolpa

Rolpa, lying in mid western part of Nepal, is one of the most backward districts in terms of infrastructure. However, it is regarded as one of the exciting potential tourism destinations in the country because of its nature, culture and political history. District headquarters Libang lies approximately 300 km west of Kathmandu. Kham Magars are the major inhabitants of the district followed by other groups like Brahmins, Chettris, Newars and Thakuris. Rolpa is the origin of the decade-long People’s War which claimed more than 10,000 people. Jaljala is one of the popular destinations in the district with immense tourism potentials.

2. Badimalika – Adventure in the Grasslands

Badimalika is one of the new trekking trails identified and explored by Trekking Agencies’ Association of Nepal (TAAN). Tilak Thapa Magar, joint treasurer of TAAN, was the leader of the exploration team. Offering some of the best natural landscapes, the trail lies in Bajura district in far-western region of Nepal. The major attraction of the trail is the temple of Badimalika which is situated on top of a hillock (4,200 meters). The place wears festive look during Janai Purnima festival (August). Thousands of people from different parts of the country as well as neighboring India visit the temple on this auspicious day. Bajura is rich in terms of culture and tradition of local people. They perform different dances like Deuda, Hudkeuli, Bhuwo and Thadi among others. The trail is operable throughout the year. But heavy snowfall during winter can affect trekkers. Though teahouses are available in lower areas, trekkers are advised to be self-sufficient on food and accommodation. As the area is relatively new, trekkers are suggested to hire local guides as the trail lacks signposts and other infrastructures. Other tourist attractions in Bajura are Khaptad National Park and Budhi Nanda Lake, among others. Similarly, the Rara-Khaptad Circuit Trek also passes through Bajura.

Lumba Sumba Trek is one of the new trekking routes identified and explored by Trekking Agencies’ Association of Nepal (TAAN) in 2012. A 20-member team, including support staff, led by Rana Bahadur Khadka, 1st vice-president of TAAN, explored the route in April. Lumba Sumba Peak (5200m) is the major attraction of this route. Offering some of the most spectacular Himalayan landscapes, this trekking route is home to different ethnic groups like the Limbus, Sherpas, Rai, Gurung, Magars, Newars and Tamangs. The trek runs through Kanchenjunga Conservation Area (KCA) in the eastern Himalaya. Trekkers can explore the traditional farming practices and see different birds and wildlife species, including the endangered snow leopard and red panda, from the route. There are a number of high mountain lakes in Olangchung Gola.

Through this route, we explore two of Nepal’s best preserved protected areas – the Kanchanjunga Conservation Area and the Makalu Barun National Park. Through the route, one can also trek to the base camps of Mt Kanchenjunga and Mt Makalu. Similarly, the Tamor and Arun River systems can be the other attraction for tourists. These two rivers are the major tributaries of the mighty Sapta Koshi River. The route encompasses alpine grasslands, rocky outcrops, dense temperate and sub-tropical forests, and low river valleys. Apart from natural beauty, trekkers can also explore cultural heritage like monasteries, chhortens, temples and prayer walls. And to add to the flavor, the festivals of all of these people living in harmony only serve to make the native culture livelier.

Dolpa is one of the most interesting trekking destinations of Nepal for many reasons. First of all, with an area of 7,889 sq. kilometers, it is the largest district of Nepal, and yet one of the most sparsely populated. Its topography is very interesting. It contains the deepest lake of Nepal, Lake Phoksundo, which also happens to be the deepest lake of high altitude in the world. Dolpa is one of the few Nepali districts that is behind the Himalayan mountains, due to which it gets very little rain. Hence, most of the hills are bare with little vegetation. Harsh weather combined with high hills makes this area one of the most inhospitable in Nepal, and yet the barren and majestic hills lend it a rare beauty that is absolutely mesmerizing. Due to the harsh living conditions, few people live or travel in these areas. As a result, the people of Dolpa are part of a very isolated culture found in specific pockets of northern Nepal. This is a land where life still revolves around horses, mules, and yaks, people still wear traditional attire and jewelry, waters are still divided on the basis of a dice game, and the remains of the dead are given to wild vultures. Even today, much of Dolpa is a restricted area for tourists, which contributed to the preservation of the unique culture of Dolpa.

Some of the attractions of this route are Dho Tarap, a human settlement at the highest altitude in the world, Shey Gumba, religiously the most important Gumba in Nepal, and lake Phoksundo, the deepest lake of high altitude in the world. The months of  March to September are good for embarking on this trek. After September, it starts snowing heavily, and trekking is possible only with heavy duty equipment. From November it is completely impassable. The best time is from March to May, as it may rain in June and July.

Gorkha, from where the unification of modern Nepal was started by King Prithvi Narayan Shah, is the first capital of Nepal. There are several places of historical and archaeological importance in the district. Blessed by nature’s splendor this land of historic, religious, ecological and cultural significance has every potential to be featured as one of the favored touristic destinations of the country.

However, the number of tourists coming to this region is limited. The district is home to Mt Manaslu and the famous Manaslu Circuit Trek. Besides, the Lower Manaslu route offers moderate trekking, historical tour, pilgrimage tour, agro-tourism, and community-based homestay. The locals are also committed to development and promotion of tourism in the district.

The Lower Manaslu Trek begins from Ghairung near the famous Manakamana Temple and progresses through Gorkha Bazaar, Sirandanda, Barpak, Laprak, Lambai Kharka, and Dharche Danda before concluding at Gyampesal. Accommodation is mostly on homestay or camping as commercial lodging is available in only a few places.

Although near to both Kathmandu and Pokhara, the Ganesh Himal Region has remained a well-kept secret to all but Nepal’s most avid trekkers. The unexplored area is concealed between the popular destinations of Langtang National Park and the Manaslu Conservation Area Project.

Wildflowers flourish, and waterfalls embellish the lush hill scenery in a land blessed with wide-ranging geographical, cultural and biological diversity. Sensational viewpoints feature the sublime Himalaya to the north. Most prominent is the Ganesh Himal Range – a family of peaks among the most attractive of the entire Himalaya. The Ganesh massif is named in honor of Hindu deity Ganesh, son of Shiva and Parvati. The Ganesh Himal area has some excellent viewpoints that offer magnificent views of peaks and valleys. Most rewarding are the magnificent Ganga Jamuna — twin waterfalls — Kalo, Seto and Ganesh kunda, hot spring and Tripurasundari temple and especially the hospitable people that inhabit the region.

The Ganesh Himal Region lies in Dhading, Gorkha, Rasuwa, and Nuwakot districts. The area is populated mainly by Tamang Gurung and Ghale to the north, and Bramhin, Chhetri, Dalit, Newar, and Chepang at the lower elevations in the south. Visitors are warmly welcomed by all with a friendliness that makes Nepal legendary. At least 10 separate trekking itineraries are recommended and await travelers promising unforgettable adventures.

The government registered trekking agencies will be happy to set up visitors with a guide and all necessities for exploring this captivating, undiscovered region. The area is easily accessed by the Prithvi Highway and Pasang Lhamu Highway along the southern fringes, connecting Kathmandu and Pokhara. Another adventurous option is to hike in from the Tamang Heritage Trail of Rasuwa and follow the Ruby Trek, so named for the precious stones found in the Area, as well as Bhalche in Nuwakot, Gorkha and Dhading Besi.