Pokhara Nepal: Best things you can do in Pokhara 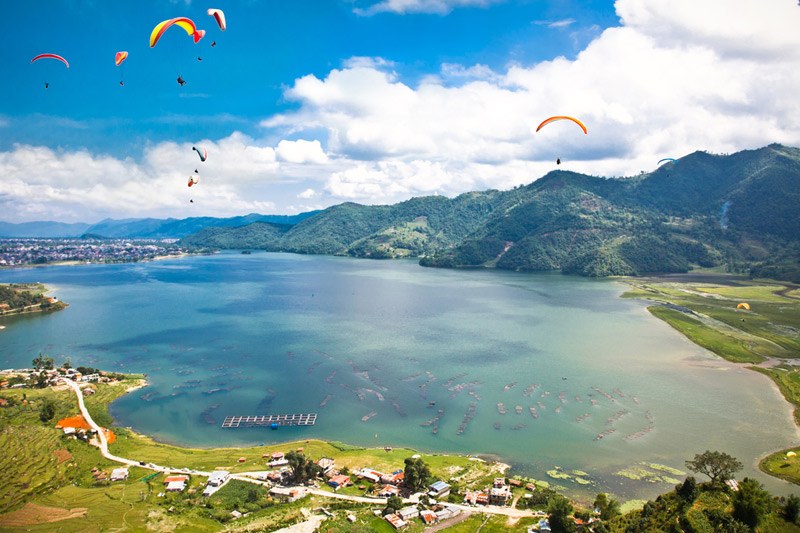 Pokhara Nepal: Best things you can do in Pokhara

Pokhara, or rather the Lakeside (Lake side) area in Pokhara is the most pleasant place in Nepal to prepare for a trek in the Himalayas or to rest after it. A standard set of vacationers who can be found in similar places around the world.

There are maximum greenhouse conditions for foreigners: hotels with views of the Himalayas, quiet clean streets, many flowers, cafes with organic coffee, organic food. Also, you can buy any clothes and shoes for trekking, the prices for it, plus or minus, are the same as in Kathmandu.

Where to stay in Pokhara

Pokhara is the third largest city of Nepal. Lakeside (area near the lake) – this is a reservation for tourists. Nepalese themselves live much more modest, but for us they have created a certain island of tranquility.

There are both very modest bungalows for $ 5 per day with a shared toilet, guest rooms and hostels for the same amount, and hotels. Different prices. The easiest and cheapest accommodation is better to look for on the spot, the hotel can be booked in advance. If you want to get enough sleep at night, then it is better to settle either completely near the lake, or on the internal streets behind the road.

What to see in Pokhara

Around the lake you can walk, sit in a cafe, lie down, float on it in a boat or kayak, fly over it on a paraplane, look at Fewa from the neighboring mountains. A lot of entertainment related to the lake, there is in Pokhara.

The only thing that is impossible is to bypass the lake around the perimeter, moving only along the water’s edge. That fence will be a closed area, then there is simply no passage. There are paths that allow partially walking along the lake through the original parks.

A small Hindu temple is located on an island in Phewa lake, you can get there by boat or by kayak. There is no need to go specifically, but if you still rented a boat and ride on the lake, you can look.

Prices for renting a boat in Pokhara:

Since a considerable percentage of Pokhara visitors are exhausted trekkers, and also yoga and vegans (or those who want to become them), there are several retreat and yoga centers on the shore of the lake.

Especially praise Sadhana yoga retreat (staff, lake view, delicious food). There are courses designed for any level of training and for any number of days (from 1 to 32 days). Prices depend on the yoga course and the number of days. For example, $ 22 for one class Hatha yoga, $ 200 for 3 days of stay and classes, they have all the data on the site.

Entry to World Peace Pagoda is free , you can put donation in the box. The Buddhist pagoda of peace stands on a mountain (1033m) on the opposite side of the lake, visible from any point of the lakeside.

You can across the lake by boat and walk through the forest through the hills to reach the pagoda ( 30-45 minutes up from the pier) or  you can come here by bike or taxi on the ring road.

You pass this suspension bridge when you walk to the pagoda of peace. Under it, the locals wash in the river and wash their laundry. Such a big laundry. The spectacle is entertaining if the life of ordinary Nepalese is interesting.

In front of this bridge there is another cheerful suspension bridge, there are some soldiers with machine guns (West Regional Armed Police Battalion), the linen is dried and white water flows into the lake.

Sarangkot is the most popular tourist destination from where the tourists can enjoy the great view of the Pokhara Valley and the magnificent view of the mountains such as Annapurna Massif, Fishtail Mountain, Dhaulagiri range, and Manaslu. Sarangkot is only 5 km from Lake Side from Pokhara and highest view point at 1592m high for Sunrise and Sunset view over the snowy peaks. Sarangkot can be reached easily by 45 minutes by a car ride to the top from Pokhara and then 45 minutes hike up to the main view point.

There is a lot of information about paragliding in Pokhara, look in the internet, incl. people tell how to get good discounts on a flight. I was planning to try, but because of the haze hanging over the city for 4 days, I refused this idea.

Caves and waterfalls of Pokhara

In Pokhara there is the Davis waterfall, Devi’s fall, opposite the waterfall is the Gupteswar Gupha cave .

In the north of Pokhara there is another Mahendra cave – here it’s not so much the cave itself that is beautiful as the funnel-shaped staircase leading down. If you rent a bike, you can drive in, from lakeside 10 km .

Also in Pokhara there are several temples and museums.

Pokhara is located in the foothills of the Himalayas, most tracks in the Annapurna massif begin in the vicinity of Pokhara, including the three most popular tracks: the Annapurna Circle, the ABC Track (to the Annapurna Base Camp) and the Gorepani Pun Hill Track, where we used to go.

Everest from Pokhara is not visible, it is on the other side north-east of Kathmandu, and Pokhara is on the west. If you plan to go to the track in the Everest region, then from Kathmandu you need to go to Lukla.

The offices of ACAP Permit & TIMS Counter in Pokhara are 400 meters from the bus stop where bass from Kathmandu arrives.

If there is little time before the track, it makes sense to immediately go off the bus to arrange the permits, and then go or go to your hotel on the Lakeside.

Where to eat in Pokhara

Most of the cafes I write about were near our guest. Naturally, if you live in a different area, there will be your own cafes. Here I indicate only those institutions that I liked. Those that did not like, much more.

Early bird
Opposite the Hotel Trekkers Inn. They came here for breakfast. A large cup of coffee with a croissant or a warm bun

Peace eye
Vegetarian cafe at the same name Gest. The price tag is average. I liked the thoughtful interior with the fire in the center of the room, the atmosphere, service and large portions. Went here often.

There are always a lot of Chinese people here, the food is delicious, if you like Chinese food and know what to order.

OR2K
The price tag is higher than in other cafes of Pokhara, for lunch an average

This restaurant is recommended in all the tops, it is in Kathmandu and Pokhara. Praise food and large portions. Cuisine of different countries (Turkey, Israel), suitable for vegetarians. I tried here only the corporate dessert (OR2K queen) and mint lemonade.

Godfather’s Pizzeria
Cook in the oven with you. Tasty and fast. Ordered pizza “All pollo” and “Calzon”. The second is more interesting.

Indian restaurant
Located opposite Godfather’s Pizzeria. At the entrance is a friendly guy of small stature.

Pokhara: how to get from Kathmandu

The distance between Pokhara and Kathmandu is 203 km. There are three options to get from the capital to Pokhara:

Here in more detail. There is a local bus  stops at every corner, picks up all the passengers, people stand, sit and hang on almost one finger, the distance between the seats is microscopic. Rides at least 8 hours.

There is a local minibus from the Kalanki stop, it departs every 30 minutes from morning until 16.00, luggage rides on the roof.

There is a tourist bus

The easiest and most common way is to take a tourist bus. There, the seats recline a little, all passengers go sitting, only two stops on the way (breakfast, lunch, toilet).

There are several places where you can rent a bike